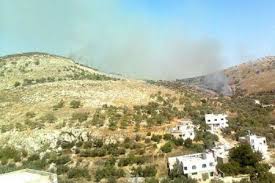 "The settlers set fire to the whole of the first floor of the mosque" in the village of Al-Mughayir, near the Shilo settlement, a security official said.

Another mosque in the same village was set ablaze in a similar attack in 2012.

Hardline Jewish settlers frequently accompany their revenge attacks with graffiti bearing the legend "price tag" but that was not the case in the latest arson attack, the officials said.

A settler and an Israeli soldier were killed in separate Palestinian knife attacks in the West Bank and Tel Aviv on Monday.

On Tuesday, Israeli troops shot dead a Palestinian protester during clashes in the southern West Bank.

Since the current round of violence began exactly five months ago with the kidnapping and subsequent murder of three Israeli teenagers by militants, at least 17 Palestinians have been killed in the West Bank, according to an AFP count.
Share to
Tags
Israeli settlers ، torch ، West Bank ، mosque ، Palestinian
Your Comment