WASHINGTON (AP) — President Barack Obama says the U.S. is less racially divided than it was when he took office, despite recent protests over police treatment of black people. 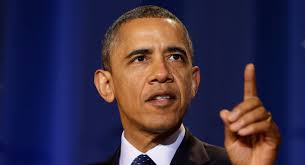 Obama says mistrust between police and minorities isn't new. He says it's being talked about more because the proliferation of smartphones allows more interactions to be recorded.

The president says he thinks the issue of race has surfaced in a healthy way.

Obama spoke to NPR News before leaving for his winter vacation in Hawaii. He says it's understandable that many people feel race relations have worsened, pointing to extensive media coverage of protests in Ferguson, Missouri, and in New York. But he says minorities who have dealt with discrimination all their lives know things have improved.
Share to
Tags
Obama ، race relations ، Ferguson ، Missouri
Your Comment