Hundreds of people have joined a silent march in Chicago to commemorate nearly 800 murder victims killed during 2016 in the country’s thirds most populous city on the last day of the year. 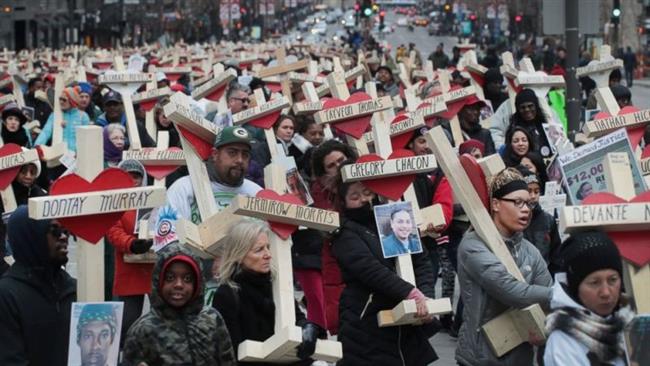 Demonstrators marched Saturday afternoon along the city’s major lakefront Michigan Avenue while carrying crosses representing each of those killed in violent crimes mostly by the use of guns, local press reports said.

The memorial rally was organized by Chicago priest Reverend Michael Pfleger, who insisted that the growing homicide rate in the large Midwestern city in state of Illinois is a city-wide problem that must be recognized by all its residents.

"The reason we’re on Michigan Avenue is because this is a Chicago problem. And until everybody in Chicago decides it’s their problem we’re not going to end it,” Pfleger said.

The cleric further stated, "The last day of the year we will remember all of who’ve been shot and killed in 2016 (and prior). We want to break the cycle of violence for 2017!”
Chicago authorities say more than 760 people have been killed in the city throughout 2016, compared to fewer than 500 homicides in Chicago during the previous year.

Among the demonstrators carrying the crosses during the silent march were family members of some of the victims.

The participants went north on Michigan Avenue from the Tribune Tower and then returned before police officers opened the street to vehicle traffic.

The march came as loved ones mourned the loss of one of the city’s latest shooting victims, 19-year-old Yuri Hardy, who was gunned down Wednesday night in the Austin neighborhood while on his way home from a dance competition. He died Friday morning.

Chicago police said they are investigating the shooting incident, but so far have made no arrests.