Three people have been killed after two small planes collided midair near McKinney in the US state of Texas. 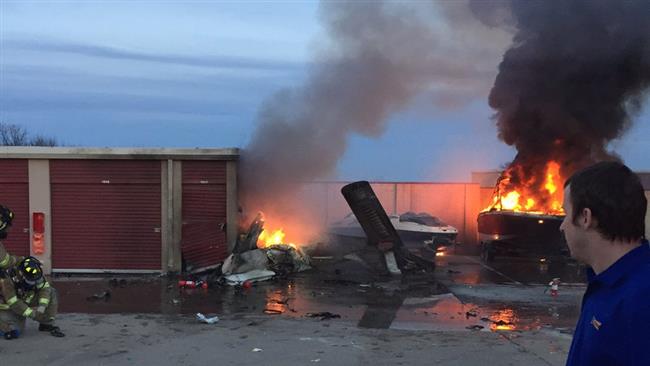 The Federal Aviation Administration said the two planes collided soon after 5:30 p.m. local time on Saturday near Aero Country Airport, which is a private airport located about 35 miles north of downtown Dallas.

"They were making a turn and one of the planes slid into the other,” Rodney Livermore, a witness, told the media. "You heard a loud crash and bang. One of them came straight down. The other one had a little control, but it was coming down. There was no stopping it.”

"Both aircraft were flying under Visual Flight Rules and were not in contact with air traffic control at the time of the collision," according to FAA spokesman Lynn Lunsford.

Witnesses said that the tail end of one of the planes broke off sending the aircraft spiraling to the ground while the other plane crashed into a Home Depot at Custer Road and Virginia Parkway.
McKinney Mayor Brian Loughmiller said in a statement, "We are devastated over the tragic plane crash that happened this evening near Aero Country Airport. Our condolences go out to the families of those who were involved and we will keep them in our thoughts and prayers in the coming days.”

Other incidents happened at Aero Country since it opened, according to Dallas News citing government records.

In 1997, a pilot died of burns after losing control of his plane, and another incident happened in 1983 when a passenger died because of a head injury after getting off the plane and walking into the arc of a propeller.
(Press TV)
Share to
Related News
Trump signs 5-year FAA reauthorization bill
Tags
McKinney ، US ، planes ، collision
Your Comment