Lebanon’s leading Arabic-language daily newspaper, As-Safir (The Ambassador), has printed its final issue after more than four decades in print due to financial problems, as other news outlets in the tiny Mediterranean country face the same grim fate. 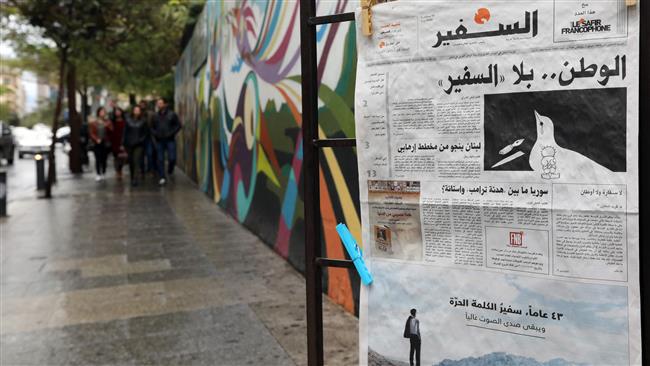 The front page of the Beirut-based political daily ran an editorial entitled "The nation without As-Safir,” which said the paper had "become exhausted ... but we continue to see some light on the horizon of the profession.”

Even though Lebanon has escaped the levels of violence that have beleaguered much of the region in recent years, the economic and political fallout has taken heavy toll on the country’s print media, the editorial also read.

As-Safir’s closure comes as its founder and editor-in-chief, Talal Salman, had announced earlier in March that falling revenues and Lebanon's political stalemate and internal divisions had left him with no choice but to close the newspaper.

"We've run out of funds and we're desperately looking for a partner to finance the paper,” he told AFP at the time.

As-Safir, which is known for its support for Hezbollah resistance movement and the Syrian government, was founded one year before the start of Lebanon's 1975-1990 civil war with the slogan "the voice of the voiceless.”

There are also reports that As-Safir's main media rival An-Nahar (The Day) would also stop printing.

Other newspapers like al-Liwaa (The Flag) and al-Mustaqbal (The Future) have also been affected by Lebanon's economic woes, which could force them to close.