Syria’s President Bashar al-Assad praised the role of Iran in his nation’s victories on the battlefield against Takfiri terror groups, saying the Islamic Republic also deserves to be congratulated on these successes. 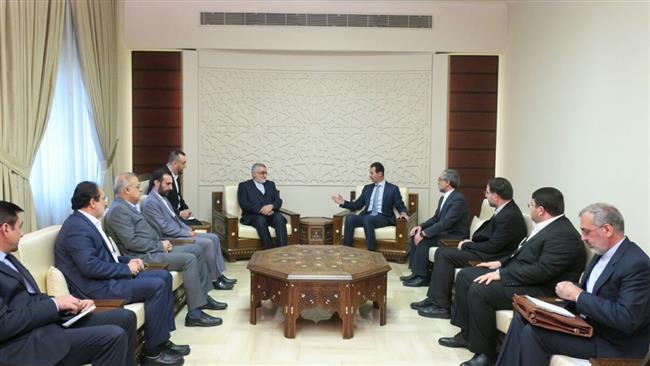 Assad made the remarks in a meeting with Chairman of Iran’s Parliament’s Committee on National Security and Foreign Policy, Alaeddin Boroujerdi, who is visiting Syria at the head of a parliamentary delegation, on Wednesday.

He said the Syrian nation should congratulate Iran on its latest gains against terrorists as they have come about with the Islamic Republic’s support.

The top parliamentarian likewise felicitated Damascus on the achievements in its anti-terror fight, notably the recent full liberation from Takfiri terrorists of the northwestern Syrian city of Aleppo.

Iran has been offering military advisory support to the Syrian military, which has been battling foreign-backed militancy since 2011.

The victory in Aleppo came in the face of the generous financial, military, ideological and political support provided by the Western states and their regional allies to the Takfiri militants pursuing Assad’s ouster.

"Iran experienced the same circumstances in the days, which witnessed the liberation of Khorramshahr,” Boroujerdi added.

Iranian forces recaptured the southwestern city in April 1982 in a landmark operation code-named Beit ol-Moqaddas from Iraqi forces under the former dictator Saddam Hussein. The invaders were in their second year of waging a foreign-backed imposed war against the Islamic Republic.

Iranian forces captured some 19,000 Iraqi troops during that operation. Some 6,000 Iraqi forces were also killed and thousands of others injured during the offensive.

The Iranian delegation is to later meet with other senior Syrian officials, including the foreign minister, prime minister and parliament speaker.