Thousands of people have taken to the streets in Bahrain to express solidarity with prominent Shia cleric Sheikh Isa Qassim, whom the Al Khalifah regime has stripped of nationality and summoned to attend a court hearing. 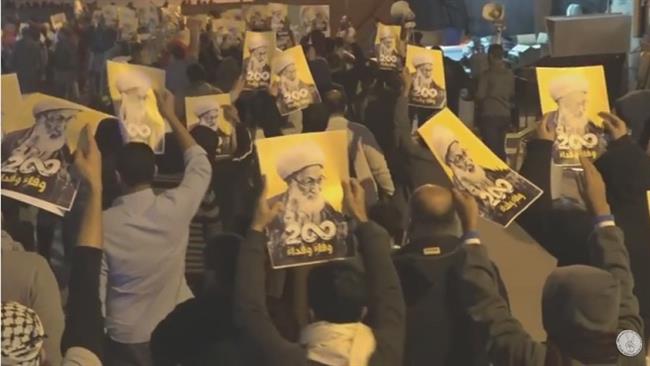 Protesters marched along the streets near the residence of the 79-year-old clergyman in the village of Diraz on Wednesday evening to declare that they will not abandon support for him under any circumstances.

They also vowed to continue street rallies until their demands for the reversal of measures against Sheikh Qassim, the spiritual leader of the country’s dissolved opposition bloc the al-Wefaq, are met.

The marchers further called for the downfall of the ruling Al Khalifah regime, and chanted slogans against King Hamad bin Isa Al Khalifa.

A similar rally was staged in the northern village of Abu Saiba, where demonstrators chanted slogans and stated that Sheikh Qassim is their red line.

Bahraini authorities stripped Sheikh Qassim of his nationality on June 20, 2016. They later dissolved the Islamic Enlightenment Institution, founded by the cleric, in addition to the opposition al-Risala Islamic Association.

Thousands of anti-regime protesters have held numerous demonstrations in Bahrain on an almost daily basis ever since a popular uprising began in the kingdom on February 14, 2011.

They are demanding that the Al Khalifah dynasty relinquish power and a just system representing all Bahrain is be established.

Manama has gone to lengths to clamp down on the dissent and rights activists. On March 14, 2011, troops from Saudi Arabia and the United Arab Emirates were deployed to Bahrain to assist the Manama government in its crackdown.