US House votes to disavow UN resolution against Israel

The US House of Representatives has overwhelmingly passed a bipartisan measure to disapprove a United Nations Security Council resolution that condemned Israeli settlements on the occupied Palestinian territories. 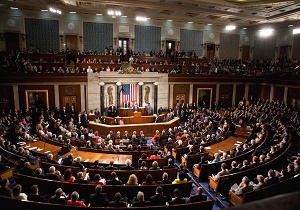 The motion, passed 342 to 80 on Thursday, described last month’s resolution as "an obstacle to Israel-Palestinian peace,” and was a rebuke to President Barack Obama’s approach to the US-Israel relationship.

It noted that the Obama administration’s decision to abstain – and not veto – the Security Council resolution "undermined” Washington’s decades-long policy of shielding Israel at the UN.

The congressional measure stated that the US "should oppose and veto future United Nations Security Council resolutions that seek to impose solutions to final status issues, or are one-sided and anti-Israel.”

In addition to a nearly unanimous Republican caucus, the measure received support from more than 100 Democrats, a significant margin that highlights broad backing for Israel on Capitol Hill.

A similar motion is expected to be taken up in the Senate.
Despite unprecedented amounts of military aid to Israel, the relations between President Obama and Prime Minister Benjamin Netanyahu has been characterized by major clashes largely over Israel’s settlement activities and the international nuclear agreement with Iran.
The relationship was further strained by the passage of UN Security Council Resolution 2334 on December 23 which demanded an immediate end to illegal Israeli settlements on Palestinian land.

Netanyahu accused Obama and his secretary of state, John Kerry, of being personally behind the "shameful act” and summoned the US ambassador over the issue.
Many congressional lawmakers also slammed the Obama administration for refusing to veto the measure and allowing it to be adopted.

In a statement on Thursday, US House Speaker Paul Ryan condemned the Security Council resolution as a "misguided hit job," and said "It's time to rebuild our partnership" with Israel.
"I am stunned at what happened last month. This government - our government - abandoned our ally Israel when she needed us the most," Ryan told the chamber shortly before the House vote.

The US had previously used its veto power at the Security Council to block similar resolutions against Israel, but White House officials said Obama felt that after eight years he had simply failed to convince Netanyahu that settlement building on Palestinian land was sabotaging the "two-state solution.”

Over half a million Israelis live in more than 230 illegal settlements built since the 1967 Israeli occupation of the Palestinian territories of the West Bank, including East Jerusalem al-Quds.