Scores of people have staged a protest in a northern German port city against the deployment and transport of NATO troops and weapons through the city. 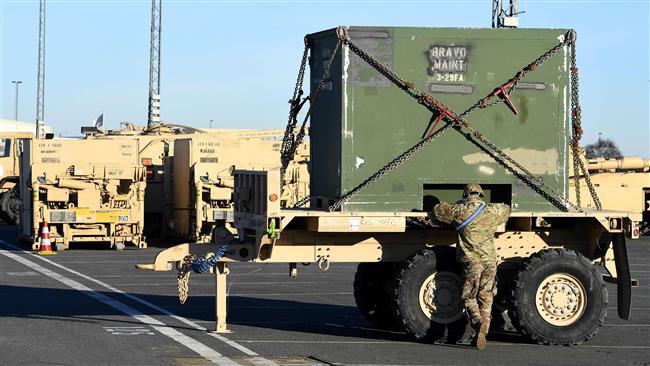 The protest was held in the port city of Bremerhaven on Saturday.

US military hardware, including 87 tanks and 144 Bradley fighting vehicles, were docked in the port city a day earlier for eventual transfer to NATO member countries in Eastern Europe to enhance what was described as "deterrence against possible Russian aggression.”

The protesters marched through the city, holding signs and banners that read, "No NATO deployments! End the militaristic march against Russia!” and "Out of NATO.”

"I am here to explain peace to Russians, because I am afraid of new wars... and this big maneuver is one that quite scares me, and I am here to speak against this,” a protester said.
The deployment by the US military, which also includes the mobilization of 4,000 troops, is aimed at shoring up NATO’s "Operation Atlantic Resolve,” which entails military buildup in Poland and the Baltic countries to counter perceived Russian aggression. US Defense Secretary Ashton Carter announced the move last year, declaring that the force would take part in regular military drills across the region with NATO allies.

Russia has repeatedly voiced concern about the US-led alliance’s military build-up near its borders. In response to NATO’s aggressive moves, Russia has beefed up its southwestern military capacity.

NATO has suspended all practical cooperation with Russia as part of efforts by the US, Europe, and their allies to exert pressure on the Kremlin following the Crimean Peninsula’s separation from Ukraine and adhesion to Russia. In 2014, the majority ethnic Russians in Crimea voted to join the Russian Federation in a referendum not sanctioned by the Ukrainian authorities.

Western countries have been fearful of a repeat of that scenario in other countries, and have sought to boost their defenses under NATO’s umbrella.
(Press TV)
Share to
Tags
Germans ، NATO ، protest
Your Comment