Japan has called on South Korea to remove from a public site a statue that pays tribute to Korean women used as sex slaves by Japanese soldiers mostly during World War Two. 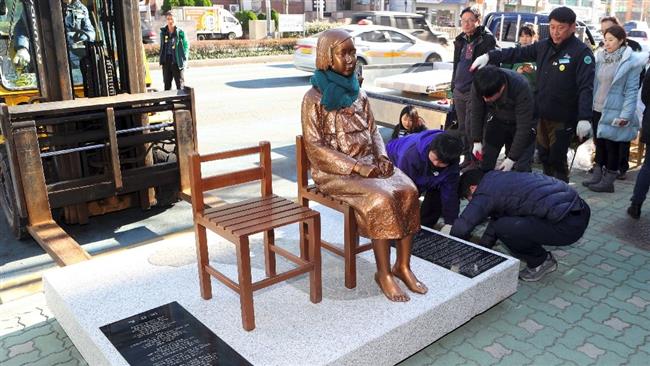 The statue, purposefully installed outside the Japanese consulate in the Korean city of Busan late last year, has rekindled a row that was presumed over when Japan agreed in 2015 to apologize and pay compensation over wartime abuse by its soldiers.

It had already been removed from the site by South Korean authorities once but was given back to activists in retaliation for a visit by Japan’s Defense Minister Tomomi Inada to a shrine in Tokyo where WWII soldiers — some of them convicted of war crimes — have been buried. Angered by the visit, South Korean authorities said they would not be stopping the activists if they went ahead with plans to reinstall the statue, which symbolizes the so-called comfort women, South Korean women who were forced to act as sex slaves for Japanese soldiers.

On Sunday, the row prompted no less a person than the Japanese prime minister to intervene.

"Japan has already paid one billion yen (8.6 million dollars) as we sincerely fulfilled our obligation. I think it is now South Korea’s turn to show sincerity in an unwavering manner,” Prime Minister Shinzo Abe said.

The opponents of the accord argue that the deal falls short of holding Japan responsible for abuses committed during its 1910-45 colonial rule over the Korean Peninsula.