Another demonstration in Mexico over fuel price increases turned violent Saturday when a lone protester drove a pickup straight into a line of riot police guarding a fuel distribution terminal, injuring seven officers. 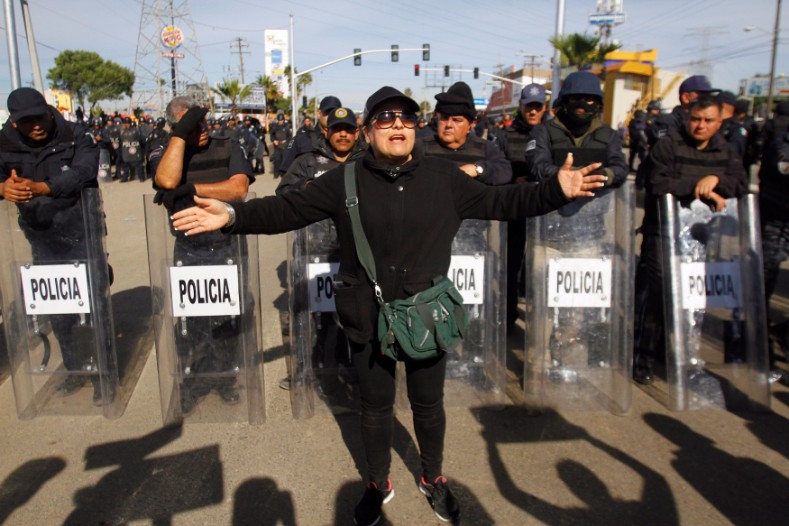 The incident in Rosarito, near the California border town of Tijuana, followed the deaths of a police officer and a pedestrian in separate looting incidents last week that were tied to the fuel protests.

According to Mexico’s Interior Department, more than 1,500 people have been detained for looting or disturbances since the protests began this month. It’s unclear how many have been charged.

The protests are in response to Mexico’s attempt to deregulate its gasoline prices for the first time since the government nationalized the industry in 1938.

But drivers, protesters, and advocacy groups say the price increases will hurt the very people that Peña Nieto's government says it aims to help.

"One has to be sensitive to the daily needs of the people," the Mexican Council of Bishops said in a statement last week. "It is not right to impose laws without taking into account peoples' realities and their feelings."

The change boosted the price of gas about 20 percent. The average price for a liter of premium gasoline stood at 17.79 pesos (about 90 cents) last week. That makes four liters, or about a gallon, cost almost as much as Mexico’s just-raised minimum wage for a day’s work – 80 pesos (about $4), as the Associated Press reported.

The increase led to nervousness, protests, and looting across the country. Ahead of the price hikes, Mexico suffered from frustrating gasoline shortages. Lines to fill up vehicles lasted for hours, and rumors circulated that gas station owners were purportedly hoarding fuel ahead of the price hikes in an attempt to turn a bigger profit.

Once the price increases took effect, protests broke out in states across the country, sometimes turning violent. Blockades and looting also occurred, which the country’s business chambers said forced many stores and businesses to close and threatened supplies of basic goods and fuel.

But Peña Nieto said the price increases under the scheme to do away with fuel subsidies would continue, in order to bring them in line with international prices.

"I know that allowing gasoline to rise to its international price is a difficult change, but as president, my job is to precisely make difficult decisions now, in order to avoid worse consequences in the future," Peña Nieto said in a televised address last week. "Keeping gas prices artificially low would mean taking money away from the poorest Mexicans, and giving it to those who have the most."