Turkey’s parliament votes to press on with constitutional reform debate

The Turkish parliament voted on Tuesday to press on with debate about a constitutional reform package that would expand the powers of President Tayyip Erdogan, taking another step on the path towards an executive presidency, Reuters reported. 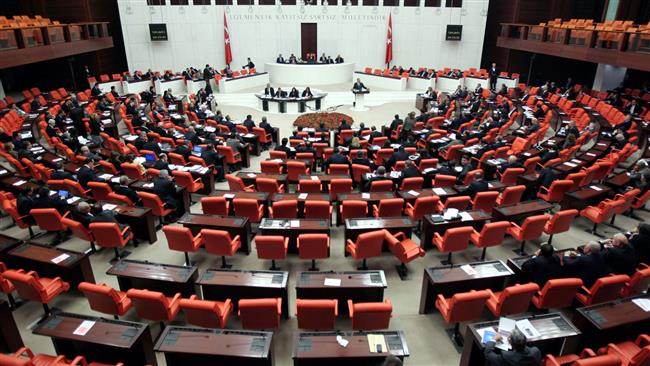 Erdogan and his supporters argue that Turkey needs the strong leadership of an executive presidency to prevent a return to the fragile coalition governments of the past, but opponents fear the reform will fuel authoritarianism.

The initial vote, an early indicator of support for the bill, was passed with 338 votes, indicating that some deputies from the ruling AK Party and the nationalist opposition MHP, which backs the reform, had not voted in favor.

The bill needs the support of at least 330 deputies in the 550-seat assembly to go to a referendum, expected in the spring. The AKP has 316 deputies eligible to vote and the MHP 39.

Under the reform, Erdogan will be able to appoint and dismiss government ministers, take back the leadership of the ruling party, and govern until 2029.

At Monday's debate on the 18-article bill, Prime Minister Binali Yildirim said the reform would resolve the problem of Turkey having two executive authorities.

Of the 550-member assembly, 480 lawmakers voted overnight, of whom 134 voted against the bill. The remaining votes were abstentions, unmarked or invalid voting slips.

Debate on the individual articles is set to begin on Tuesday and the AKP plans to complete debate of the package by Jan. 24.