Astronomers have studied the deepest X-ray image of all time to discover a “treasure trove” containing thousands of supermassive black holes. 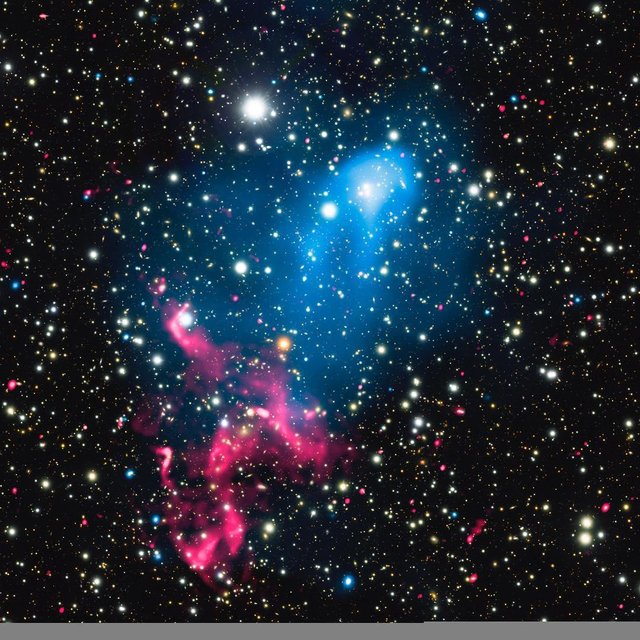 The image shows the highest concentration of black holes ever seen. Using the same density and from our perspective on Earth, the concentration is comparable to roughly 5,000 in an area the size of the full moon, or around one billion across the entire sky.

The astonishing image was made using data collected over seven million seconds, or eleven and a half weeks, of observations by Chandra, NASA’s Giant Metrewave Radio Telescope (GMRT) in India.

Astronomers also discovered that two of the most powerful phenomena in the Universe have combined to create what is called a ‘stupendous cosmic particle accelerator’. This discovery solves a long-standing mystery in galaxy cluster research.

A supermassive black hole and two giant galaxy clusters called Abell 3411 and Abell 3412, located about two billion light years from Earth and each weighing about a million billion times the mass of the sun, collided, leading hot gas produced by one cluster to plough through the hot gas of the other cluster, Time reported.

"It’s almost like launching a rocket into low-Earth orbit and then getting shot out of the Solar System by a second rocket blast,” said the study’s co-author, Felipe Andrade-Santos of the Harvard-Smithsonian Center for Astrophysics. "These particles are among the most energetic particles observed in the Universe, thanks to the double injection of energy.”