Russian Defense Minister Sergei Shoigu accused the US-led coalition of having made no positive contribution to the counter-terrorism fight in Syria, but rather worsened the conflict gripping the Arab country. 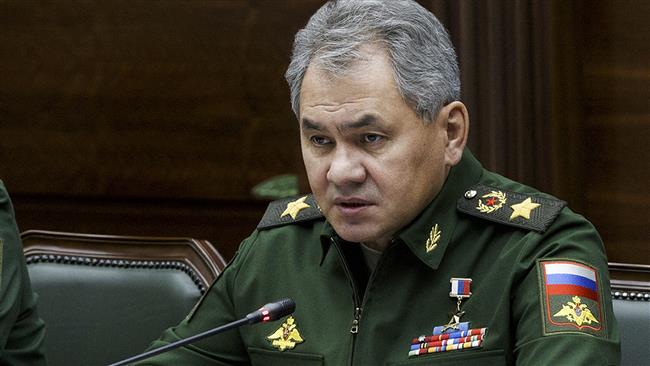 Speaking at a Defense Ministry meeting in Moscow on Tuesday, Shoigu stressed that Moscow had achieved its main objectives in Syria regarding the anti-terror battle.

He further noted that the US-led alliance’s assistance for Russia’s Syria campaign "did not rate at a zero, but a negative score, and to my great regret we did not see this support.”

Shoigu's comments came two days after US Defense Secretary Ashton Carter claimed that the Russians had given "virtually zero" support to Washington in its alleged fight against Daesh militants in Syria and Iraq.

The coalition’s non-cooperation "required the exertion of all our forces, all our capabilities, deploying quite a serious grouping including aircraft carriers and others," the Russian official added.

Separately on Tuesday, Russian Chief of General Staff Valery Gerasimov said the coalition airstrikes did not have "any significant results" in Syria and caused a "considerable number of deaths among civilians and government troops."

On January 3, over 20 civilians lost their lives in a coalition air raid on the town of Sarmada in Syria’s Idlib Province in violation of a nationwide ceasefire that took effect on December 30, 2016, he further pointed out.

The official went on to say that the 2016 September airstrikes by the US-led alliance killed 62 Syrian soldiers and injured 100 others near Dayr al-Zawr Airport.

Moscow launched its campaign against Daesh and other terror outfits in Syria at the Syrian government’s request in September 2015. Its air raids have helped Syrian forces advance against foreign-backed militants wreaking havoc in the Middle Eastern state since 2011, presstv reported.

This is while the US-led coalition has also been conducting airstrikes against what are claimed to be Daesh terrorists inside Syria since September 2014 without any authorization from Damascus or a UN mandate.