Iranian President Hassan Rouhani underlined the need for a campaign against terrorism, which he described as a menace to the entire world. 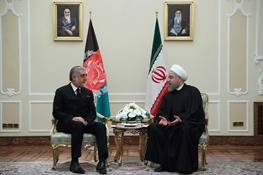 The Iranian president made the remark during a meeting with Afghanistan's Chief Executive Abdullah Abdullah in Tehran on Wednesday.

The Islamic Republic of Iran will spare no effort to assist the Afghan government and nation, he said, adding that Iran would continue to stand by Afghanistan.

Rouhani expressed hope that joint projects will be implemented as soon as possible with the strengthening of political stability and unity in Afghanistan.

The Iranian president also said that the development of Chabahar Port and railroad networks, including the railway linking the Iranian city of Khaf to the Afghan city of Herat, could promote Tehran-Kabul cooperation.

The Afghan official, for his part, praised Iran’s support for his country and welcomed further development of ties with Iran in different fields.

Abdullah arrived in Tehran on Wednesday to attend a memorial ceremony for Ayatollah Akbar Hashemi Rafsanjani, the late chairman of Iran’s Expediency Council who passed away on Sunday.