Iranian Deputy Foreign Minister for Arab and African Countries Hossein Jaber-Ansari stressed sending humanitarian aid to Syria and reconstruction of the country without any precondition. 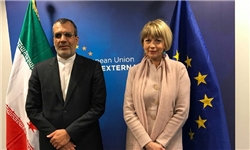 In a in meeting with the EU Foreign Policy Deputy Chief Helga Schmid in Brussels, he stressed fighting terrorism and finding a political solution from Syrian-Syrian negotiations simultaneously.

"The Islamic Republic of Iran has always believed that there is no political solution to regional crises, including the one in Syria. The beneficiary countries in Syrian crisis should play a supporting and facilitating role and devolve decision about Syrian future to Syrians, so that unity, territorial integrity and national sovereignty of the country are preserved without any foreign interference,” he said.

Schmid, for her part, highlighted Iran’s constructive role in the region and Syrian crisis, and called for further cooperation and consultation between Iran and the EU regarding this issue.

"Our aim of talks with the Islamic Republic of Iran as a key player in Syrian crisis is to get access to grounds which can help terminate Syrian crisis through ceasefire and reconstruction plans in this country. The plans can bring an end to the long-lasting crisis with the assistance of the UN and other players,” she said in the meeting.

The two sides also emphasized finding a political solution to sort out crises in Syria and other regional countries.