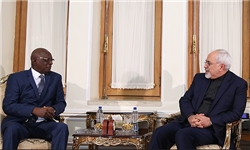 Zarif in a meeting with the visiting President of the National Assembly of Mali Issaka Sidibe here in Tehran, emphasized solidarity of the Islamic World to confront common dangers threatening all aides, and expressed hope that the upcoming Islamic Inter-Parliamentary Union (IIPU) conference would take measures to confront the dangers.

The two sides conferred on expanding bilateral ties in parliamentary fields, holding the next IIPU conference in Mali, significance of Iran as the founder of the structure, fighting roots of extremism and terrorism, especially economic and cultural roots and necessity of holding a joint economic commission between Iran and Mali.

"Boosting bilateral ties with Iran is of great importance for us. We regard the nation of Iran as a resistant nation with strong will,” Sidibe said in the meeting.