Authorities in Europe have raised the death toll from the recent cold snap in the continent to at least 73 people, as heavy snow further blankets eastern European countries, where many refugees are living in already poor conditions. 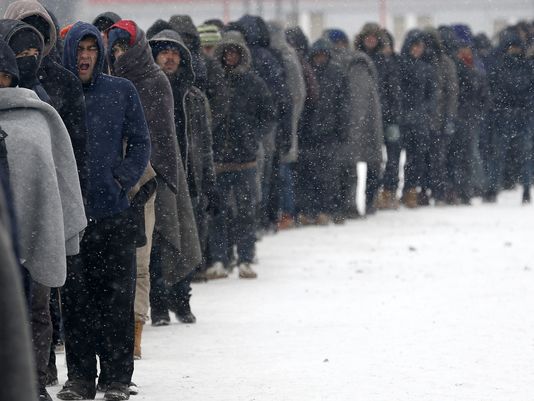 The cold spell started last week and gripped large swaths of land in Europe, particularly in its eastern parts, reducing temperatures to the lowest some of them have experienced in decades.

Authorities in Poland, which has been hit the hardest by the crippling freeze, reported on Wednesday that two more people had lost their lives, raising the country’s death toll to over 20 people.

Greece, which is home to large numbers of refugees, said that it had sent a ship to the island of Lesbos to house some 500 asylum seekers. The move came after rights groups put Athens under fire for keeping the refugees in snow-covered tents and sub-zero temperatures at campsites, Presstv reported.

Amnesty International has launched an online petition calling on European Commission President Jean-Claude Juncker to urge Athens to "urgently” move the refugees from Greek islands to the mainland, warning him that some of the refugees "are now at risk of freezing to death.”
The UK-based rights group also said that these refugees have been "held hostage” in dire conditions in Greece because of the European Union’s "inhumane and dysfunctional policies.”

In Kosovo, where many outages occurred, meteorologists reported that they had recorded temperatures as low as minus 14 degrees Celsius, saying it was the coldest weather since 1963.

According to authorities in Albania, blankets of snow cut off communities in the southern parts of the country, where nine people have died since the cold snap began. Army choppers and emergency workers are also distributing aid to remote areas non-stop, and the military is clearing snow-covered roads.

In Romania, the howling blizzards caused the blockage of over 130 roads and plagued railways with numerous cancellations and lengthy delays.

Authorities in Serbia announced on Wednesday that six people had lost their lives due to severe cold during the past several days. Some 130 snowbound residents were evacuated in the worst-affected areas.
And since early this month, at least four elderly people have died of hypothermia in Bosnia and Herzegovina.