Iran slammed execution of three Bahraini detainees, saying the move demonstrated Manama is not looking for opening a way out of the crisis in the country. 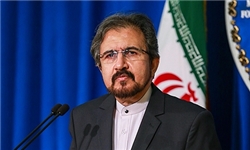 "The unwise move of Manama showed that the country (Bahrain) is not after peaceful settlement and opening a way out of Bahrain’s crisis,” said Iranian Foreign Ministry Spokesman Bahram Qassemi.

‘Lack of transparency’ in the unfair trial of the three citizens has been confirmed by international communities and all public organizations across the world, he said.

He further said that Bahraini state is still insisting on security approaches, cracking down and brutal killing of defenseless protesters.

Bahrain has executed three anti-regime Shia activists over their alleged role in a 2014 bomb attack, amid widespread public anger against the death verdicts.

The regime in Manama carried out the death verdicts on Sunday, triggering angry demonstrations in the villages of Diraz, Bani Jamra and Sanabis.

Regime forces tried to disperse the protesters by firing pellets and teargas canisters and injuring a number of the demonstrators.

Manama’s troops also prevented people from holding a funeral procession for those executed.
According to the Bahrain Mirror news website, the authorities have refused to return the bodies of the three activists to their families.