Syrian premier due in Iran Tuesday 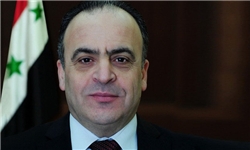 He is schedule to meet with Secretary of Iranian Supreme National Security Council Ali Shamkhani and other Iranian high-ranking officials during his stay in Tehran.

His visit to Iran is a follow-up to Shamkhani’s last week visit to Syria.

Shamkhani and Khamis are going to continue consultations and pursue agreements on economic, political and security fields.

Pursuit of political processes and boosting bilateral infrastructural and strategic cooperation are other subjects of their talks.

Earlier on Monday, Shamkhani underlined that Tehran will continue its support for the Syrian government and people.

Stressing President Assad's popularity, he said, "In the view of the Syrian people, he has been able to resist during the current crisis despite all the political, security and economic pressures."

"If the westerners believe that Assad is not popular anymore, then why are they concerned about his candidacy again," Shamkhani asked.

His remarks came after President Assad appreciated Iran for its sincere support for Damascus in the war on terrorism, and said Tehran should also be congratulated for the recent victories against the terrorist groups in Syria, specially in Aleppo.

"We should felicitate you on these victories (too) since they have been materialized with your support," President Assad said in a meeting with Chairman of the Iranian parliament's National Security and Foreign Policy Commission Alaeddin Boroujerdi in Damascus earlier this month after the latter congratulated him on the recent successes in the war on terrorism.

Iran has helped Syria in the fight against the terrorist groups by playing a military advisory role based on the defense agreements between the two countries.