Iranian researchers have designed and developed a smart robot for rehabilitation of the lower limb, helping patients to go through the treatment program even in absence of doctors. 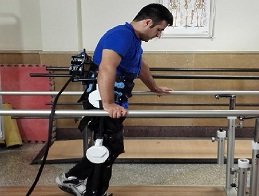 Mohammad Alizadeh, the lead author of the study said the robot rehabilitates lower limb to speed up returning health to people who need rehabilitation and athletes.

He said the robot speeds up rehabilitation process and reduces physiotherapy sessions by 3 times, adding, the remote-controlled device is of increased precision as well.

The Iranian scientist continued using the device, there is no need to presence of physiotherapist when a sports team is in camp.

The patient is connected to the device and receives physiotherapy program through social networks, Alizadeh added.

The individual then gives the rehabilitation program to the device, he said, adding, finally a report about accuracy of the process would be sent to the doctor.

He said that the idea of building the smart robot was inspired by the German model of the robot, adding, "We were inspired by several mechanical structures and artificial intelligence process to design and build the robot.”

Iran has in the last few years taken a wide stride in area of science and technology, including robotic sciences.