Iranian President Hassan Rouhani said the historic deal over Iran's nuclear program and its implementation belied claims about the country seeking weapons of mass destruction and demonstrated the honesty and sincerity of the Islamic Republic. 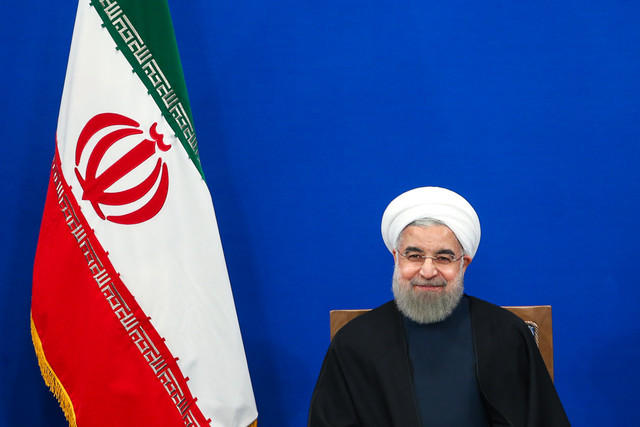 Rouhani made the remarks in a press conference attended by some 200 Iranian and foreign reporters in Tehran on Tuesday on the first anniversary of the implementation of the country's nuclear agreement with the P5+1 group of countries, known as the Joint Comprehensive Plan of Action (JCPOA).

Since the implementation of the JCPOA, the International Atomic Energy Agency (IAEA) has confirmed Iran’s compliance with its obligations under the nuclear agreement in several reports.

In his visit to Tehran on December 18, 2016, the IAEA Director General Yukiya Amano expressed satisfaction with Iran’s compliance with its commitments.

Prior to the signing of the JCPOA, Iran had repeatedly asserted that it was not after development of weapons of mass destruction and its nuclear program was exclusively for peaceful purposes, the Iranian president said, adding that the agreement was a moral victory for Iran, because it proved the country's honesty and showed that what had been claimed against the Islamic Republic was merely baseless allegations and lies.

Elsewhere in his remarks, Rouhani noted that those who claimed that Iran sought to develop nuclear and other weapons of mass destruction were speaking unjustly and unjustifiably and they should be ashamed of themselves now.

"Very few pundits believed that the issue of PMD (Possible Military Dimensions to Iran's nuclear program) would be resolved, and the International [Atomic Energy] Agency would admit that Iran's outstanding issues had ended," the Iranian president said.
Describing the JCPOA as "a great national achievement," Rouhani said, "The closure of this dossier amounted to a moral victory for the great Iranian nation."

Rouhani stressed that all nuclear-related sanctions against the Islamic Republic have been removed after implementation of the JCPOA started, adding that there are no more bans in the gas, oil and transport sectors.

He added that, however, the US, given its hostility toward the Islamic Republic, has been creating obstacles in the banking transactions between Tehran and the rest of the world.

Rouhani said Iran "is standing with great might and powerfully against" the violations of the JCPOA, adding, however, that "we have not acted and will not act hastily, because national interests are a principle for us and we will always bear in mind these interests."

Elaborating on the existing tensions in relations between Iran and Saudi Arabia, Rouhani said the foreign policy of the Islamic Republic has been founded on forging close ties with neighboring countries, including the littoral Arab states of the Persian Gulf.

Rouhani stated that the root cause of the existing problems between Iran and Saudi Arabia was Riyadh's war on Yemen, adding, "Saudi Arabia must stop strikes on Yemen as soon as possible."

The Iranian president also mentioned Saudi Arabia’s intervention in developments going on in other parts of the region, including Bahrain, as another cause of tensions between Tehran and Riyadh.

Referring to severance of diplomatic ties between Tehran and Riyadh, Rouhani said, "It was Saudi Arabia, which decided to unilaterally cut ties with Iran and this was not our decision."

He added that some countries, including Iraq and Kuwait, had sought to mediate for the improvement of relations between Iran and Saudi Arabia, adding that if Saudi officials "take up the right path and make correct decisions," Tehran is ready to even help Riyadh with regard to regional affairs, including in Yemen, and to promote peace and unity in the region.

In September 2015, a deadly human crush occurred during Hajj rituals in Mina, near Mecca. Unofficial sources put the death toll at almost 7,000 people of whom about 465 were nationals of Iran. Days into the incident, Saudi Arabia published a death toll of 770, but refused to update it despite gradually surging fatality figures from individual countries whose nationals had been among the victims of the crush.

Earlier that same month, a massive construction crane had collapsed into Mecca’s Grand Mosque, killing more than 100 pilgrims, including 11 Iranians, and injuring over 200 others, including 32 nationals from Iran

Serious questions were raised about the competence of Saudi authorities to manage the Hajj rituals in the wake of the incidents, and in the face of Saudi Arabia's intransigence to guarantee the safety of Iranian pilgrims, officials in the Islamic Republic subsequently decided to halt pilgrimages over security concerns.

Saudi Arabia also unilaterally severed its diplomatic ties with Iran in January last year after protests in front of its diplomatic premises in Tehran and Mashhad against the execution of eminent Saudi Shia cleric, Sheikh Nimr al-Nimr, by Riyadh.

Elsewhere in his remarks, Rouhani noted that Iran's economic growth currently stood at 7.4 percent, "which has no parallel in the region."

He added that 700,000 jobs were also created in the country during past year while only six countries in the world have been able to create over 600,000 jobs per year.

Answering a question on the situation in Syria, Rouhani noted that the first and foremost priority in the Arab country was to maintain ceasefire and prevent resumption of armed conflict in those regions where ceasefire has been enforced, Presstv reported.

Rouhani noted that at present, conditions have been provided in Syria for real negotiations among all warring parties.

Referring to the forthcoming talks on Syria in Kazakhstan’s capital city of Astana, the Iranian president said Astana talks will be based on Syria-Syria dialogue.

He reiterated that nobody should be allowed to make a decision on the future of Syria on behalf of its people, because it is only for the Syrian nation to decide their country's fate.