Iran’s Shamkhani: Enemies should not be let use Syrian ceasefire for strengthening terrorists

A senior Iranian official said enemies should not be allowed to take advantage of Syrian ceasefire and political talks to strengthen terrorists. 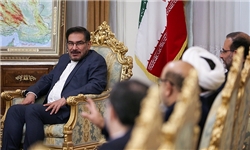 "Enemies should not be allowed to take advantage of ceasefire and political talks as a tactic to strengthen terrorist groups in terms of members, financial support and weapons,” said Secretary of Iranian Supreme National Security Council Ali Shamkhani in a meeting with the visiting Syrian Prime Minister Imad Khamis here in Tehran on Tuesday.

Continuous all-out efforts to liberate terrorist-held areas in Syria to return peace and security to Syria as well as pursuing Syrian-Syrian talks for national reconciliation secure continuation of success in managing the current crisis in Syria, Shamkhani said.

Shamkhani also stressed continuous battle against Takfiri-terrorism and said this front should be distinguished from armed groups which believe in political talks.

"Unfortunately, western countries and the US impose sanction on Syrian officials and Resistance Front instead of fighting terrorists elements who are threatening their national interests. This issue indicates their dual-track approach in dealing with terrorism.”

Khamis, for his part, said pursuing political path to get through the crisis in Syria is one of the important options. "Syrian government has always held talks with unarmed opposition which believe in keeping solidarity of Syria.”

Appreciating Iran’s extensive support for Syrian nation and government, he said that sustainable solution and establishing peace and security are closely associated with changes in approach of certain countries supporting terrorism and need their real confrontation with al-Nusra, the ISIL and other groups linked to them.