Turkish prosecutors called for an imprisonment term of up to 142 years for the co-head of the country’s pro-Kurdish opposition party over alleged charges of links to Kurdish militants. 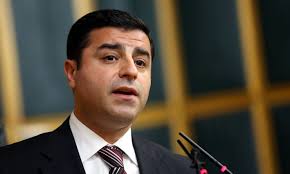 In an indictment released on Tuesday, the prosecutors in Turkey’s Kurdish-majority southeastern city of Diyarbakir demanded a jail term of between 43 and 142 years for Selahattin Demirtas, the Peoples' Democratic Party (HDP) co-leader, who has been held in custody for more than two months.

They accused Demirtas of "aiding an armed terrorist organization knowingly and intentionally without being a member,” in reference to the Kurdistan Workers’ Party, also known as the PKK.

Among other charges leveled against the politician were "praising crime and the criminal” and "inciting people to violence and hatred.”

Elsewhere, the indictment called for a prison sentence of between 30 and 83 years for the other HDP co-chair Figen Yuksekdag, Presstv reported.

The two officials were arrested in November 2016 along with another nine HDP lawmakers.

Amnesty International denounced the arrests as "the latest escalation in the government’s evisceration of Kurdish opposition voices in public life.”

The HDP officials have all denied having any links with the PKK and denounced, with Demirtas saying he is facing punishment for daring to oppose President Recep Tayyip Erdogan's push for a presidential system.

Turkey has declared the PKK a terrorist organization and has banned it. The militant group has been calling for an autonomous Kurdish region since 1984.

Turkish ground and air forces have been carrying out operations against the PKK positions in the country’s troubled southeastern border region as well as in northern Iraq and neighboring Syria.

The anti-PKK operations began in the wake of a deadly July 2015 bombing in Suruc, which the Turkish government blamed on the Takfiri Daesh terrorist group.

After the bombing, the PKK militants, who accuse Ankara of supporting Daesh, engaged in a series of reprisal attacks against Turkish police and security forces, prompting the Turkish military operations.

A shaky ceasefire between Ankara and the PKK that had stood since 2013 was declared null and void by the militants following the Turkish strikes against the group.