Alarm in east of Syria

Daesh has carried out horrible military operations in Deir ez-Zur,east of Syria, separating the city’s military airport from its residential areas. 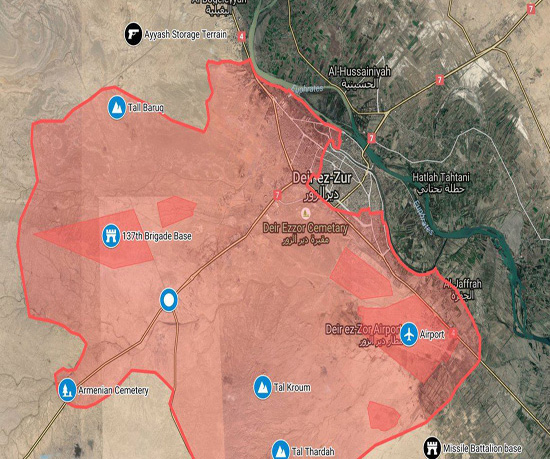 One of the operational regions where Syria has long been fighting against Takfiri terrorists is Deir ez-Zur from which these days we hear no good news. Recently, Daesh has carried out horrible military operations in Deir ez-Zur,the east of Syria, separating the city’s airport from its residential areas.

Being adjacent to Iraq, Deir ez-Zur has been always of immense importance for Daesh. Therefore, Syrian armies fighting the terrorists in the region would impact Iraq’s condition.

After several days of consecutive attacks and occupying several important points of the city in the past two days, Daesh finally promulgated it has succeeded to dispatch the airport from Deir ez-Zur residential areas and blockade it. Although the whole city has been besieged by Deash for nearly 3 years, relief operations were carried out in the city in differnt ways and helicopter landing in night also was possible. But now with the airport captured by Daesh, the residential areas of the city have been blockaded too.

In case that no reinforcements join the besieged area, the situation will get worse. Daesh has recruited thousands of militants to trespass the airport. Yet, the effective presence of Syrian army helicopters and Russian Su-25 fighters to destroy Daesh positions in the area is assessed important.

Syrian and Russian fighters have intensely targeted Daesh positions in Deir ez-Zur on Monday evening and caused heavy casualties to the terrorists, according to Syrian army officials.
The protection of Deir ez-Zur means to protect Syria’s territorial integrity in the eastern parts of the country, so to liberate and protect it  from the terrorists is of critical importance for the country.

Recently, Daesh terrorists have made attempts repeatedly to capture the military airport of Deir ez-Zur. According to Syrian sources, the terrorists’ dominance on the very airport would facilitate their entering the east of Syria and threat the lives of more than 500,000 Deir ez-Zur residents. The airport is strategically crucial for it cut off relief lines to Daesh terrorists.

The collapse of Deir ez-Zur is a complete human as well as strategic catastrophe for Syria and its allies. that in case of happening, there would be no opportunity to compensate it like Tadmur. The collapse, further, could mean a perceptible political and military imbalance between the involved parties in Syria crisis.