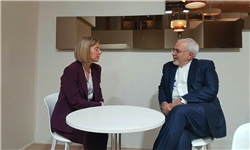 Zarif stopped in Switzerland to attend the annual World Economic Forum in Davos that convened on Tuesday where 3,000 delegates from all over the world engaged in a series of meetings and discussions about "entrepreneurship in the global public interest”

He is going to deliver speech on the latest regional developments, especially Syrian crisis in the conference.

The two sides also conferred on the latest developments in Syria.

Iranian foreign minister and his Finnish counterpart Timo Soini exchanged views on issues of mutual interests as well as developments in the Middle East and the world.