Shamkhani: US not to have a role in Astana meeting

Secretary of Iranian Supreme National Security Council Ali Shamkhani said that the US would not have a role in the upcoming Astana meeting on Syria. 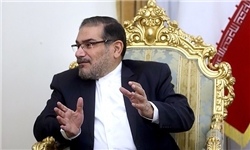 "Due to Iran’s opposition to the US participation in Astana meeting, no invitation has made for the US presence by the three countries which raised initiative of the meeting,” he said.

"There have been no reason for the US participation in managing and leading current political initiatives in Syrian crisis and the country will not play a role in Astana meeting.”

The Iranian official said that the Islamic Republic of Iran as a country with major role in supporting Syrian legal government in battling terrorism would have an active role in political processes, including Astana meeting.

"No doubt that the US will not have a role in the process of dialogue and concluding Astana meeting. It is likely that the host country invites the US as an observer.”

The Kazakh capital is to host the negotiations between representatives from the Damascus government and foreign-sponsored opposition groups on January 23.

The talks are to be mediated by Russia, Turkey, and Iran.

The three countries have over the past several months been working together and holding trilateral talks aimed at improving the situation on the ground in the Arab country.

Last month, such efforts led to the conclusion of a deal enabling the evacuation of civilians and armed elements out of the northwestern city of Aleppo as it was being liberated by the Syrian Army.

Iranian officials, most importantly Foreign Minister Mohammad Javad Zarif, have voiced opposition to Washington’s attendance, citing its dedication to the ouster of the Syrian government thought supporting the terror groups.

Russian Foreign Minister Sergei Lavrov has, however, said he believes US representatives should be invited to the meeting.

The United States and its regional allies, namely Turkey, Saudi Arabia, and Qatar, have been lavishing financial and political support on anti-Syria terror group since 2011, when the outfits unleashed their campaign of violence against the country.