No military solution to Syria, says Zarif in Davos

Iranian Foreign Minister Mohammad-Javad Zarif reiterated that there is no military solution to Syrian crisis. 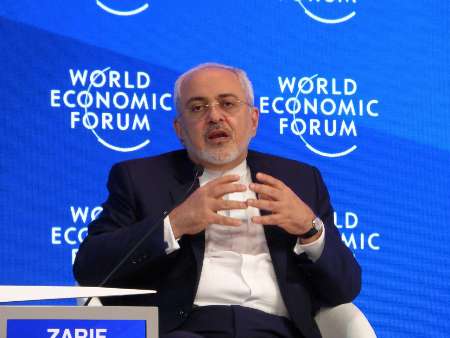 "There is no military solution to Syrian crisis, but we should reach a solution by which Syrian nation can talk to each other,” he said as he was delivering speech in World Economic Forum in Davos on Wednesday.

"This is our strategy of talks in Astana meeting. Russia, Iran and Turkey are making efforts in the same way. We hope that all sides of Syrian ceasefire take part in Astana talks and violence ends in this country.”

He also said that Astana meeting does not run counter to efforts of other international organizations for settlement of Syrian crisis.

Zarif called on all sides to pave the way for a successful future for Syria, adding terrorism, extremism and violence are threatening all and they should be confronted collectively.

Asked about future of Tehran-Riyadh ties, he said, "I do not see any reason for hostility between Iran and Saudi Arabia. We can work together in international fields, including settlement of Syrian, Yemeni and Bahraini crises.”

Over 3,000 delegates from all over the world are expected to engage in a series of meetings and discussions about "entrepreneurship in the global public interest” in Davos.