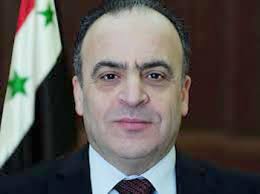 Khamis called mutual cooperation between Iran and Syria a historic coalition, and said, "We are after establishing long-term strategic approach with Iran during this visit (to Iran).”

In a meeting with Ali Akbar Velayati, a senior adviser to Leader of the Islamic Revolution Ayatollah Seyyed Ali Khamenei here in Teheran, Syrian prime minister appreciated Iran’s support in the recent victories in Aleppo, and said Syria is proud of cooperation with Iran in fighting against terrorists.

"This is a historic coalition between the two countries.”

He expressed hope that bases of bilateral ties between Iran and Syria would be strengthened in future.

Khamis reiterated that Syria would continue battling terrorists until the last drop of blood to protect its territorial integrity and reconstruct organizations and infrastructures.

He also said that the upcoming Astana conference is the result of cooperation and joint effort of Iran and Russia, "We hope resolutions of the meeting will be in favor of Syrian nation.”

Khamis noted that he is after expanding bilateral ties between Tehran and Damascus especially in economic fields during his visit.

Iran and Syria signed several agreements during a visit by Khamis to Tehran, under which the Islamic Republic will build a mobile service operator in the Arab country.

Khamis and Iranian Vice President Es’haq Jahangiri oversaw the signing of five memorandums of understanding in Tehran on Tuesday to expand economic relations.

Under the deals, Syria will grant a license to Iran to operate the Arab country’s third mobile service provider and allow the Islamic Republic to set up a petrol terminal on 5,000 hectares of land.

Syria will also give Iran 5,000 hectares of farmland and commission the operation of phosphate mines in Sharqiya and a port in the Arab country to Iranian companies.

Khamis arrived in Tehran on Tuesday with a large business delegation, with Jahangiri saying the visit marked "a new page for economic activities between the two countries."

The trip takes place in the wake of Syria’s biggest victories recently in its fight against foreign-backed terrorists, especially in Aleppo.

Jahangiri said the victories are the result of "the gallantry and steadfastness of the Syrian people, army, the fighters of the resistance axis, and also the result of coordination on the field as well as political coordination between Syria and Iran.”

Khamis later met Secretary of Iran’s Supreme National Security Council Ali Shamkhani who called for all-out efforts for the liberation of the remaining areas under the control of terrorists in Syria to continue.

Syria has begun reconstruction work in eastern Aleppo following the recent liberation of the strategic city from the grip of Takfiri terror groups.

A video released last Wednesday showed tractors and forklifts in the Saif al-Dawla district clearing the streets of sandbags and rubble amid efforts to help civilians return to normal life to eastern Aleppo, which had been under militant control since 2012.

Syria’s economy has been battered under a ferocious conflict being waged by foreign-backed militants. Damascus was a major ally of Tehran during eight years of war with the former Iraqi dictator Saddam Hussein in the 1980s.

In May 2013, Iran agreed to provide Syria with a $3.6 billion credit line for imports of goods and commodities and implementing civilian projects.

Iranian firms are involved in a series of electricity generation projects worth $660 million in Syria, according to Energy Ministry officials.

A plan has been mooted for exports of Iranian electricity to Syria which would hook up Iran’s national grid with those of Iraq and Lebanon, creating the biggest power network in the Islamic world.