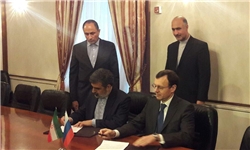 The MoU included the first phase of mutual cooperation in stable isotopes under the Joint Comprehensive Plan of Action (JCPOA) as well as a roadmap to implement a MoU already inked with Rosatom late 2015 on peaceful use of nuclear energy.

Iranian Ambassador to Russia Mehdi Sanaie was also present in the meeting.