Turkish MPs have once again engaged in physical violence after a female lawmaker handcuffed herself to the parliament’s podium in protest at a constitutional reform package under debates. 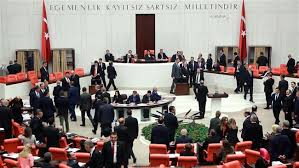 Independent legislator Aylin Nazliaka attached herself to the microphone on Thursday, forcing the deputy parliament speaker to call recess twice.

The row erupted among female lawmakers during the recess as efforts failed to convince Nazliaka to end her protest.

The lawmakers started shoving and slapping each other after one legislator proceeded to unscrew the microphone.

Two legislators, including Pervin Buldan, a deputy speaker from the pro-Kurdish Peoples’ Democratic Party (HDP), and Gokcen Enc, with the ruling Jutice and Development Party (HDP), were hospitalized following the brawl.

It was the third such fight during parliamentary debates over the controversial bill proposed by the AKP.

If adopted both in the parliament and a national referendum, the new constitution would cancel the parliamentary system of government in favor of a presidential one.

On January 11, Turkish lawmakers got engaged in physical violence, pushing each other and exchanging blows during a round of voting.

The opposition lawmakers accused the ruling party of breaching the law on secrecy of ballot by displaying their votes.

So far, the parliament has approved seven out of the 18 articles of the draft constitution.

Under the new mechanism, Erdogan would be allowed to serve two five-year tenures. With the exception of his current mandate, he could thus be leading the country until 2029, with the next elections being scheduled for 2019.

The reforms would also enable the president to appoint and dismiss government officials at his own discretion.

The president would further be able to be a party member, thus giving Erdogan a permit to return to the leadership of the AKP, which he himself has founded.

Under the new charter, the number of parliamentarians will be increased from 550 to 600, as well.

The AKP has only 316 deputies eligible to vote on the bill, which needs 330 ‘Yes’ votes at every parliamentary hurdle. The party, therefore, relies on its allies from the Nationalist Movement Party (MHP) for approving the bill.

The AKP and the MHP say the changes will create a strong executive leadership vis-à-vis the fragile coalition governments of the past.

The proposed reform package has been met with strong opposition from the Turkish legislature’s second- and third-biggest parties, the Republican People’s Party (CHP) and the HDP.

Critics say such changes to the constitution will fuel authoritarianism as it places too much power in the hands of the president, Presstv reported.