Iranian Ambassador to the UN Gholam-Ali Khoshrou said that UN Security Council recent session was a confirmation that Iran has complied with its commitments to the Joint Comprehensive Plan of Action (JCPOA). 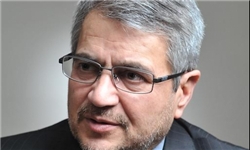 "What came in the briefing session of the UN Security Council confirmed Iran’s fulfillment to JCPOA obligations by representatives of countries attended the session,” he said.

The meeting was held to evaluate process of Resolution 2231.

He said that the UN Security Council member states mostly supported the expanding process of implementing the agreement as an important achievement in multi-lateral diplomacy,
Khoshrou said.

They called for compliance of all parties with commitments to the nuclear deal, and stressed that the agreement has considerably paved the way for improving economic cooperation, he continued.

The Iranian envoy further said that US and UK positions raised in the session as Iran’s meddling in the region was not so relevant to the subject of the session, but in practice showed their deep unhappiness with terrorists’ failure in Syria and their failure in Yemen.

He said that disappointment of the countries is natural, since they see their influence is losing in Syria.

Despite selling billions of dollars of weapons, including British cluster bombs to aggressors and continuous use of weapons against oppressed people of Yemen, the nation is still resisting, he added.