Senior officials of France, Britain, Russia, Turkey, Azerbaijan, Belarus and Pakistan extended condolences over shocking collapse of the Plasco 17-story building in Tehran which claimed the lives of 20 fire fighters and left 20 others missing. 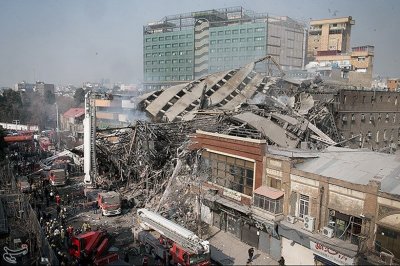 French embassy in Tehran in a tweeted message expressed sympathy with families of the victims of the tragedy.

British Ambassador to Iran Nicholas Hopton in a tweeted message said, "So sad about the tragic loss of life in the building that collapsed near the embassy today. My sympathy to all those affected.”

Britain's Under-Secretary of State for Foreign and Commonwealth Affairs Tobias Ellwood, in a message said, "Returned from Tehran today, very sad to hear of terrible fire and building collapse in the city. Thoughts & sympathies with all affected.”

Belarusian President Alexander Lukashenko in a message to his Iranian counterpart Hassan Rouhani said, "We received news of numerous casualties of the incident. We send condolences to families of the victims and Iranian nation.”

Pakistani Prime Minister Nawaz Sharif’s office in a message offered condolences to Iranian nation and government over the horrifying incident.

Turkish Prime Minister Binali Yıldırım in a message to Iranian First Vice-President Eshaq Jahangiri condoled with families of victims of the tragedy and expressed sorrow over martyrs of Iranian fire fighters.

Azerbaijan embassy in Tehran issued a message condoling with Iranian nation and brotherly and friendly state over the financial and human loss.