More than 200 protesters have been arrested in demonstrations during US President Donald Trump’s inauguration in Washington. 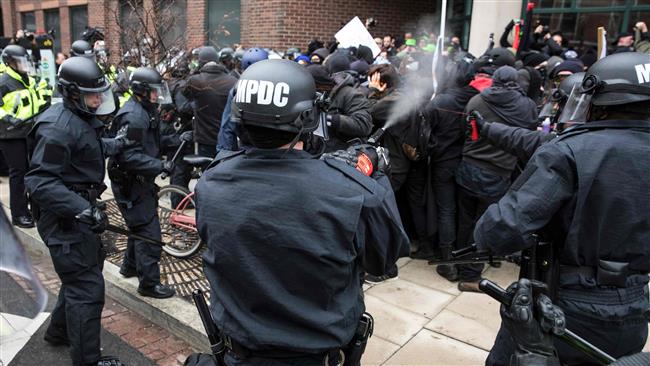 Washington police said they arrested at least 217 people on Friday, accusing them of acts of vandalism and destruction of property. They were protesting against Trump's inauguration.

Around 500 people, wearing masks, marched through the city’s downtown with some of them smashing windows and blocking traffic.

Officers in riot gear used pepper spray, tear gas and stun grenades to disperse the crowd, some of whom were armed with crowbars and hammers, according to authorities.
Two officers were injured while they were trying to arrest some protesters, police said.

Some other protesters were carrying signs of support for Democratic presidential nominee Hillary Clinton who was defeated by Trump in the November 8 election last year.

"The message I want to send is that Trump does not represent this country. He represents the corporate interests,” said Jessica Reznicek, a 35-year-old Roman Catholic aid worker from Des Moines, Iowa.
The US Secret Service, Washington police and other law enforcement agencies used nearly 28,000 officers to tighten security in a roughly three-square-mile (7.8 square km) of downtown Washington.

Trump was sworn in as the 45th president of the US at Capitol Hill, pledging to embark on "a great national effort" to rebuild the country.

In his inaugural address, Trump vowed that he would take a decision that puts "only America first."

Before he took the oath of office, protesters descended on Washington with a message for him: "You’re not my president."
(Press TV)
Share to
Related News
Trump bars door to refugees, visitors from seven nations
Trump to order ban on refugees, restrict immigration
Tags
anti-Trump protest ، Washington ، arrest ، police
Your Comment