US President Donald Trump has signed an executive order aiming to “ease the burden of Obamacare" which covers some 20 million Americans. 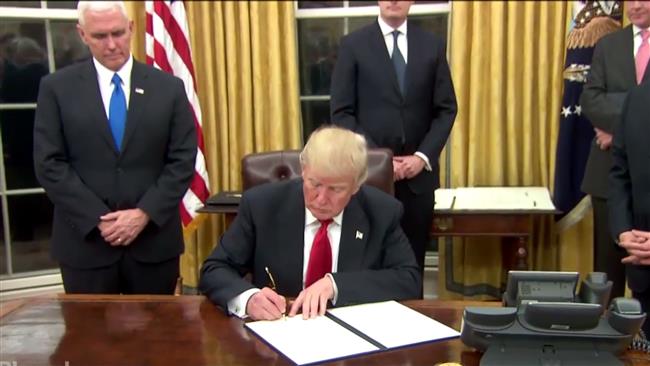 Within hours of taking the oath of office, Trump fulfilled one of his most impassioned promises he had made during his presidential campaign.

The president signed the order in front of reporters at the Resolute Desk in the Oval Office on Friday night.

His chief of staff Reince Priebus described the order as aimed at "minimizing the economic burden" of the 2010 Affordable Care Act, "pending repeal."

Until lawmakers are able to repeal Obamacare, "it is imperative for the executive branch to... take all actions consistent with law to minimize the unwarranted economic and regulatory burdens of the Act, and prepare to afford the States more flexibility and control to create a more free and open healthcare market," the executive order said.

Though the order did not direct any specific actions, it gave authority to the Department of Health and Human Services and other agencies to take legal actions to ease regulatory requirements from Obamacare.

"He has been told that he needs to comply with the law," said Timothy Jost, an emeritus professor at Washington and Lee University School of Law, "but is directing the agencies to begin taking steps towards reducing regulatory requirements and giving more discretion to the states."

The order will give states more flexibility and control over their health care markets, in keeping with longstanding Republican beliefs. They believe Obamacare marked a costly drift toward socialized, European-style medical care.

Priebus sent out a memo to all government agencies and departments calling for a regulatory freeze.