Tens of thousands of people have converged on the streets of the South Korean capital, Seoul, demanding the swift ouster of the country's desperate President Park Geun-hye and the Samsung heir’s arrest for alleged corruption. 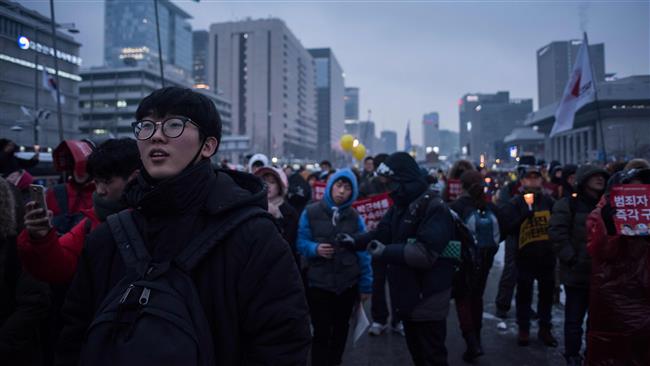 Some 150,000 angry people, according to the tally given by organizers, convened in the Gwanghwamun square on Saturday evening, chanting slogans against Park and Lee Jae-yong, the most powerful man behind the South Korean multinational conglomerate, demanding their arrest and calling them "co-culprits” in the current scandal.

Park is amid a months-old major corruption scandal, in which the first female president of the East Asian country allegedly colluded with long-time confidante Choi Soon-sil to pressure major corporations to contribute money to non-profit foundations controlled by Choi.

Park has denied misconduct in the case but nevertheless apologized for being careless in her
ties with Choi, who is facing her own trial, Presstv reported.

Park has already been impeached by the parliament, however, South Korea’s Constitutional Court is debating whether to confirm the parliamentary impeachment vote. If her impeachment is upheld by the court, she will be forced out of office.

Although the South Korean leader has been stripped of her substantial executive powers, she is allowed to retain the title of presidency and continue to live in the presidential Blue House. The Asian country has been the scene of numerous protests in recent months, calling for the ouster of Park.

The Seoul Central District Court earlier in the week also turned down a prosecution request for the arrest of Lee Jae-yong citing the inadequacy of evidence.

The decision, however, infuriated both the prosecutors and anti-Park protesters.

"I was shocked and very angry. The court knelt down before Samsung. This shows the business empire is above the law,” said one of the protesters.

Meanwhile, some 10,000 of Park’s loyalists waged a counter-rally in Seoul, protesting her impeachment.

Police deployed dozens of armored vehicles and hundreds of anti-riot forces in a bid to separate the two rival groups lest any potential clash between the two erupts.