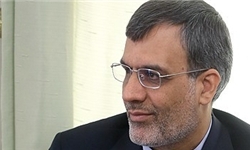 "The trilateral group of Iran-Russia and Turkey is not a replacement to the international Syria Support Group (ISSG)” Ansari said in a meeting with UN special envoy on Syria Stefan de Mistura in Astana.

Ansarri also referred to measures and consultations among Iran, Russia and Turkey for success of Astana meeting on Syria and stressed the UN should play a role in facilitating Syrian-Syrian talks.

UN special envoy on Syria Stefan de Mistura, for his part, said the UN is ready for facilitating talks between Syrian government and armed groups in Astana talks.

He expressed the hope that the meeting could strengthen ceasefire in Syria and pave the way for political settlement of Syrian crisis.

Representatives of the Syrian government and opposition groups have gathered in the Kazakh capital Astana to hold peace talks aimed at ending the six-year conflict in the Arab state, with senior diplomats from Iran, Russia and Turkey mediating the process.

The two-day talks are slated to begin at 13:00 local time (07:00 GMT) at Astana’s Rixos President Hotel on Monday, said the head of the Russian delegation Aleksandr Lavrentiev.

The negotiations, which are backed by the United Nations, will be held behind closed doors.

At the event, Iran and Russia will be mediating on behalf of the Syrian administration, while Turkey will be siding with the opposition.

The United Nations Syria envoy Staffan de Mistura is also in the Kazakh capital for the negotiations.