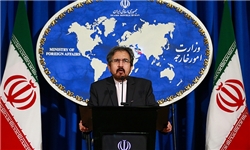 "We wanted, want and will want a Syria which is of territorial integrity, independence and national sovereignty,” he said in a press conference on Monday.

"One of the objectives of the meeting is to stabilize ceasefire and fight terrorism. We can take further steps if we reach agreements on these fields.”

He noted Astana meeting has been resulted from efforts of Iran, Syria and Turkey and was planned after Moscow talks whose main objective is a meeting between Syrian opposition and state.

"What is presumed to be the first priority is to stabilize ceasefire which is probably the most important point which should be discussed in Monday and Tuesday meeting,” he added.

Qassemi continued the meeting would have a big success in case it manages to take steps towards stabilizing ceasefire.

He said presence of Turkey as one of the three countries which have mediated the talks is considerable.

Turkey, given its role and position in the region and since it is neighboring Syria could have a useful presence in Astana talks and play a constructive role under joint cooperation and considering Iran and Russian positions, he said.