British Prime Minister Theresa May will learn on Tuesday whether parliament must agree to the triggering of Britain's exit from the European Union, potentially giving lawmakers who oppose her plans a chance to amend or hinder her Brexit vision. 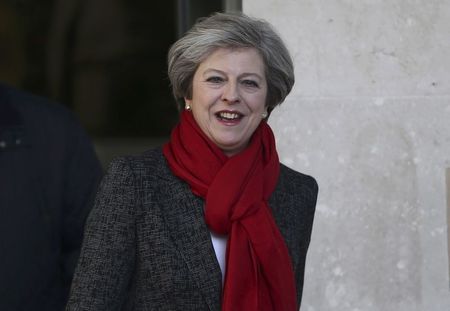 The UK Supreme Court will give its ruling at 9:30 a.m. (0930 GMT) in a landmark case on whether May can use executive powers known as known as "royal prerogative" to invoke Article 50 of the EU's Lisbon Treaty and begin two years of divorce talks.

Challengers, led by investment manager Gina Miller and backed by the Scottish government and others, say May must first get lawmakers' approval as leaving the EU will strip Britons of rights they were granted by parliament.

That view was backed by London's High Court, prompting the government to appeal to the Supreme Court, the highest judicial body in the land.

The case has attracted huge attention from markets, with investors hoping parliament will temper moves towards a "hard Brexit", and it has again brought to the fore some of the ugly divisions among Britons produced by last June's referendum.

Brexit supporters have cast the legal battle as an attempt by a pro-EU establishment to thwart the referendum result after Britons voted by 52-48 percent to leave the EU, with judges denounced as "enemies of the people" and Miller receiving death threats and a torrent of online abuse.

"We are not being asked to overturn the result of the EU referendum," David Neuberger, president of the Supreme Court said at the conclusion of a four-day hearing in front of all its 11 judges in December.

"The ultimate question in this case concerns the process by which that result can lawfully be brought into effect."

If May wins the case, she can follow her planned timetable for invoking Article 50 by the end of March, Reuters reported.

If she loses - a more likely eventuality according to legal experts - she will probably need to bring in a parliamentary bill that will open up the Brexit process to scrutiny from lawmakers.

Share to
Related News
Theresa May in battle to keep Scotland in UK, Britain out of EU
UK minister tells lawmakers not to delay Brexit
Tags
UK ، Brexit ، May
Your Comment