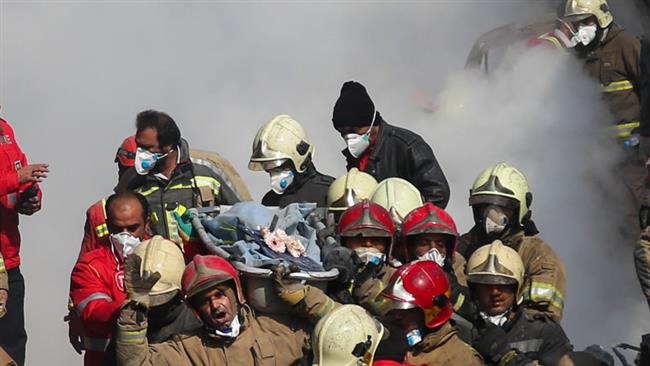 On Wednesday, rescue teams pulled out eight more bodies buried under rubble as they reached the ground stories of Plasco Building that collapsed in downtown Tehran on January 19.

Rescue workers had already retrieved two bodies from the debris of the building. A firefighter was also killed on the first day of the rescue operation.

Iranian rescuers on Sunday night also recovered four bodies that did not belong to any firefighters still missing under rubble.

Tehran Mayor Mohammad Baqer Qalibaf had initially said that 20 firefighters had lost their lives trying to contain the fire.

The 17-storey Plasco Building, built more than 50 years ago, caught fire early on January 19 and came down only hours later, leaving many firefighters and an unspecified number of people buried under rubble.

More than 190 people were also injured in the incident.

The chances for finding any survivors seem low due to the extreme heat caused by fires that reignited as debris was removed.

The cause of the building fire and collapse is being investigated following an order by Iranian President Hassan Rouhani who tasked the Interior Ministry with investigating the causes of the tragic incident.

Managers had already been warned about safety issues of the building, Presstv reported.

The building, one of Tehran’s oldest high-rises, was home to hundreds of production workshops and was known mostly for its clothing stores.