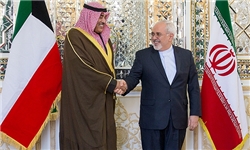 "It is necessary to settle misunderstanding and disagreements among regional countries in a calm atmosphere and direct talks,” he said in a meeting with his Iranian counterpart Mohammad-Javad Zarif here in Tehran.

There are various historical, cultural and religious commonalities between Iran and regional states, he added.

"We should focus on looking ahead in our ties and dialogues,” he added.

The Kuwaiti official further stressed looking ahead considering common dangers including terrorism in the region.

"The role of Kuwaiti Emir in boosting neighborly among regional states is laudable,” Zarif added.

He also referred to existing problems in the region and stressed "looking ahead” considering common enemies and dangers.