The deadly blaze which led to the collapse of the Plasco high-rise in downtown Tehran was mainly caused by an electrical short-circuit, Iranian Interior Minister Abdolreza Rahmani Fazli said. 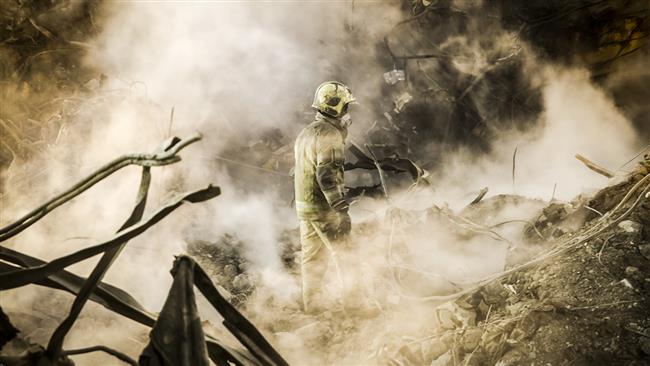 "Electrical short circuit is the first cause of the Plasco incident,” Rahmani Fazli told reporters on the sidelines of a conference in Tehran on Thursday.

The death toll rose to 19 -- 15 fire fighters and four other citizens -- on the eighth day of the rescue operations after rescuers pulled out the bodies of four firefighters from the debris.

Meanwhile, head of Tehran’s Criminal Court of Justice Mohammad Shahryari rejected reports that dozens of people were under the rubble. He said about eight people have been reported as missing so far and investigations are underway to find their location.

The 17-storey Plasco Building, built more than 50 years ago, caught fire on January 19 and came down only hours later, leaving several firefighters and others buried under the rubble. More than 190 people were also injured in the incident.

The chances for finding any survivors seem slim due to the extreme heat caused by the fires that have reignited as the debris is being removed.

So far, 1386 trucks have removed a major part of the rubble from the site. However, the operation slowed down on Thursday as workers found a large amount of molten metal gathered in the location, spokesman for the crisis committee Jalal Maleki said.

Tehran Municipality authorities say they had repeatedly warned about safety issues at the building. Plasco, one of Tehran’s oldest high-rises, was home to hundreds of production workshops and was known mostly for its clothing stores, Presstv reported.