Russia says the next of round peace negotiations, which were planned to be held between the Syrian government and opposition groups early in February, have been postponed to the end of next month. 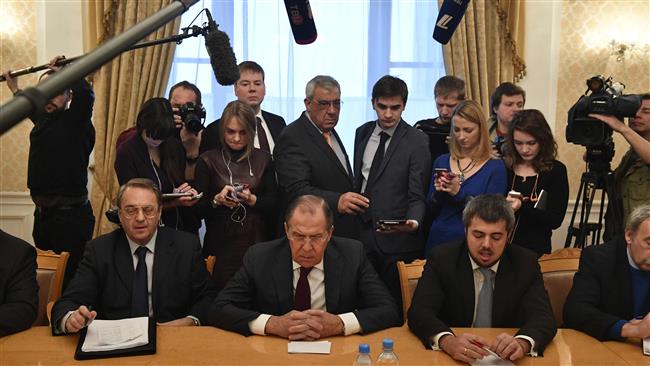 "The date of February 8 has been put back until the end of next month,” Russian Foreign Minister Sergei Lavrov told a meeting with Syrian opposition groups on Friday.

The upcoming negotiations, which are to be hosted by the United Nations, will follow two-day talks held between Syria’s warring sides in Astana, Kazakhstan, earlier this week with the mediation of Iran, Russia and Turkey.

At the end of Astana talks on January 26, Iran, Russia and Turkey agreed on the establishment of a trilateral mechanism to support the ceasefire in Syria and monitor possible violations.

In another development on Friday, Russian Foreign Ministry spokeswoman Maria Zakharova expressed hope that Moscow’s cooperation with Turkey and Iran on the Syria crisis would be long-term.

Prior to the Astana event, Moscow, Tehran and Ankara had helped pave the way for a countrywide ceasefire deal between Damascus and opposition groups. The agreement does not apply to the Takfiri Daesh and Fateh al-Sham terror groups.

Among the salient features of Astana talks was the absence of Saudi Arabia and Qatar, which had taken part in previous meetings on Syria in Geneva.

The government of Syria had voiced its vehement disagreement to participation of Riyadh and Doha in Astana talks ahead of the international gathering, citing their support for armed militants, who have wreaked havoc in the Arab country.

Marginalization of the United States was another feature of the Astana talks. Iran had objected to the presence of Washington in Syria peace negotiations, with Foreign Minister Mohammad Javad Zarif noting that no joint invitation had been extended to the United States for participation in Syria talks.

At the Astana talks, Iran, Russia and Turkey stressed that there was no military solution to the Syria conflict and that the crisis could be only resolved through a political process based on full implementation of the United Nations Security Council Resolution 2254.

The three countries also agreed to work out a trilateral agreement with the goal of supervising the ceasefire in the Arab country.