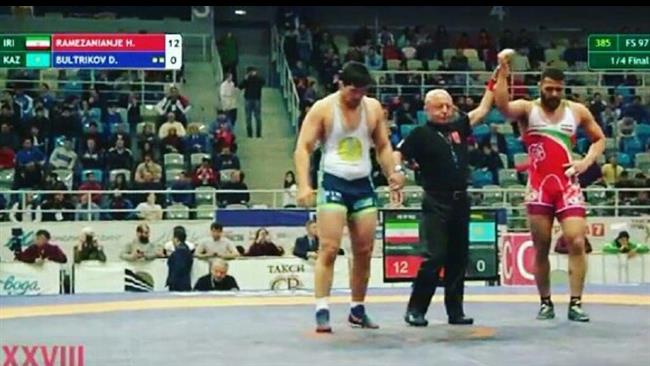 On Sunday, Mohammad Mehdi Yeganeh-Ja’fari defeated Masakazu Kamoi from Japan 3-2 in the first round of men’s 65-kilogram bouts at Yenisei Football Arena in Russia's southern Siberian city of Krasnoyarsk, located about 4,000 kilometers from Moscow, and progressed to the next level.
The Iranian athlete overcame Uzbek rival Sirojiddin Hasanov 6-0 in the second contest, before falling to Russian opponent Chermen Valiev 3-9 in the quarterfinals.
Yeganeh-Ja’fari could find a place in the repechage round 2 match, after Valiev could snag a berth in the final.
The Iranian wrestler won against Mongolia’s Lkhamgarmaa Narmandakh 2-0 and took the bronze.
Additionally, Hossein Ramezanian prevailed over a representative from Bulgaria at the end of his men’s 97-kilogram repechage round 2 match and received a bronze medal.
Earlier in the tournament, Mohammad Javad Ebrahimi and Jaber Sadeqzadeh had managed to snatch a silver and bronze medal in the men’s 86-kilogram and 125-kilogram weight classes respectively.
The Golden Grand Prix Ivan Yarygin 2017 kicked off in Krasnoyarsk, Russia, on January 27, and wrapped up on January 29.
Dozens of male and female freestyle wrestlers from various countries, including the Islamic Republic of Iran, Japan, Kazakhstan, Mongolia, Russia and the United States took part in the tournament.
The three-day annual event was in honor of the late Russian heavyweight freestyle wrestler and two-time Olympic champion Ivan Yarygin.
The tournament is part of a Golden Grand Prix Series, and is one of the most sought-after freestyle wrestling titles.
(Press TV)
Share to
Tags
Iran ، Golden Grand Prix ، wrestlers
Your Comment