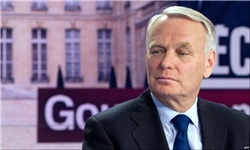 He is going to take part in Iran-France joint economic commission meeting, scheduled for Tuesday, during his two-day stay in Iran.

He and his Iranian counterpart Mohammad-Javad Zarif are going to sign a MoU on Tuesday as well.

Jean-Marc Ayrault will meet Iranian President Hassan Rouhani and Zarif, as well as other Iranian officials.

Dozens of executives from French companies are accompanying Ayrault to sign business deals with Iranian clients.

This is the first visit by a foreign minister of a world power since the new U.S. administration took office.

In 2015, Laurent Fabius — Ayrault's predecessor — visited Tehran following the nuclear deal between Iran and G5+1. The deal limited Iran's nuclear activities in return for the lifting of sanctions.

Many officials from European countries have visited Iran since the deal went into effect last year.