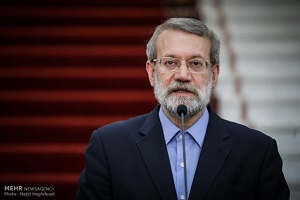 Addressing the Parliament’s Monday open session, Ali Larijani delivered a speech on the occasion of the 38th anniversary of the victory of Islamic Revolution.

After extending heartfelt congratulations to the Iranian nation and MPs on Fajr Decade, the official said "upon arrival in Iran in 1979, Imam Khomeini brought about a big change which can be dubbed as the largest reordering of the century as it brought an end to the dictatorship of Shah who deemed representativeness of the US as his greatest honor.”

He recalled that in Imam Khomeini’s theory, the government was founded on Islamic thoughts and people were the main rulers as evidenced by the title ‘Islamic Republic’ which embraces the two main principles.

"In Imam’s view, people were centerpieces in all domestic issues be it in politics, economy or culture. All governmental organizations were establishing via direct voting of people as the Parliament, as the essence of people’s will, was placed on top of all issues.”

He said independence in all sectors was introduced by Imam Khomeini as the root of national dignity which was shown in the ‘Neither East nor West’ principle as the main axis of Iran’s diplomacy; "even though world powers disliked the policy and imposed Saddam’s war against Iran, they were eventually forced to end the battle after finding out that Iranians were indefatigable in fights.”

He emphasized that Imam’s policies have undoubtedly brought prosperity to the nation; "Iran, which was previously disfavored by Islamic states for its support of the Zionist regime, has now turned into the main axis of resistance and development.”

Larijani said Iran had achieved knowhow of nuclear energy despite international pressures and could maintain the knowledge following a nuclear deal adding "Iran is also the main power in the fight against terrorism though 60 large countries are only seeking to deal with the issue on paper.”

As regards economic independence, Imam Khomeini encouraged the youth to become self-sufficient in areas of new technologies and we could obtain missile capabilities during the war despite all sanctions, he continued.

Parliament speaker of Iran went on to enumerate numerous economic achievements of Iran as from the Islamic Revolution including the significant rise in share of various industries in the country’s GDP.

He expounded on noticeable progress made in agriculture, literacy, health insurance, transportation, telecommunications as well as energy sectors and provided detailed statistics on every field.

Later into his remarks, Ali Larijani regretted to say that certain adverse measures, rooted in political competitiveness, were undermining significance of Islamic Revolution.

He urged that coverage of the Revolution be expanded rather than removing certain directors and managers from circle. The official stressed that investments had to be made on commonalities between politicians and directors rather than their differences.

He reassured that existing issues like inflation could be resolved through national unity and determination rather than focusing on marginal issues.

Parliament speaker later touched upon an article entitled ‘Why do we like Iran?’ composed by an Egyptian politician saying, the author has enumerated nine reasons to support his claim.

"The first reason is that Iranian authorities, unlike Arab ones, spared no effort in line with powerful development of their country,” said Larijani.

He said the second reason was Iran’s progress in scientific, cultural and technological areas though Arabs have remained in a standstill in this regard; "the third was that Iran made developments in controlling Israel’s nuclear power.”

Reason number four was that Iran supported the Resistance Front by supplying weapons and consultations while Arabs are against the Front.

He said the fifth reason was that Iranian authorities firmly opposed Israeli-American plots at a time when Arab leader back these projects.

"The next factor was that Iranian leaders, unlike Arabs, were not after sabotage or gathering wealth and the seventh reason was that Americans were desperately after talks with Iran.”

Larijnai noted that the eighth reason was that Iranians were in charge of appointing or changing their leaders while Arab authorities merely ruled upon people; "the last reason why they like Iran was that Iranians are their Muslim neighbor who are against divisive measures.”

He invited Members of the Parliament (MPs) to appreciate the Islamic Revolution by truly serving the honorable people of Iran.