French foreign minister has said respecting the JCPOA has been of high importance for France and it has been committed to defend it. 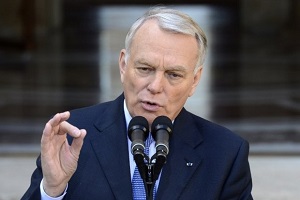 Jean-Marc Ayrault made the remarks during the Iran-France economic conference in Iran Chamber of Commerce, Industry, Mine and Agriculture on Tuesday, which he was attending in accompany of his Iranian counterpart Zarif.

"France has been committed to defend JCPOA,” Ayrault said adding that his country was among the first ones to re-establish ties with Iran after the deal.

He continued "bilateral ties particularly in field of economy is beneficiary for both Paris and Tehran and France has never acted so fast in working with any other country.”

Elsewhere in his speech, French official underlined that Paris is seeking long-lasting ties with Tehran in energy and transport sectors.

Ayrault also noted Iran’s "well-known higher education” and expressed Franc’ will to expand academic ties further while recalling that 17 MoUs have been signed before in this regard.

"Peugeot and Renault have resumed their activities in Iran and the first Airbus has been delivered; Total also has sealed oil purchase deal with Iran; I hope all other contracts get into action as fast,” he said.

Ayrault reaffirmed the bright future of Tehran-Paris ties and urged both sides to try the best to ease the financial issues; "France has been active in issuing export guarantees for Iran and this is an indication of trust we have in Iran; Iran also has to remove its financial obstacles for foreign investors to enter the market.”

He also stressed that Iran and France would work to ease the visa issuance.

Ayrault arrived in Tehran on Monday night heading a political and economic delegation.