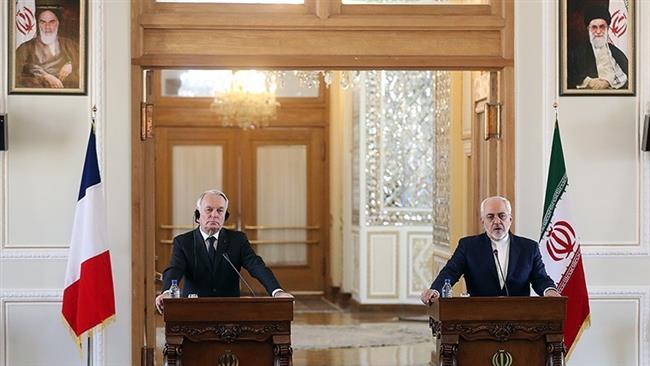 "We hope that the issue of Iran’s defense program… does not turn into a pretext for political games,” Mohammad Javad Zarif said at a joint press conference with his visiting French counterpart Jean-Marc Ayrault in Tehran on Tuesday.

Zarif referred to the Islamic Republic’s ballistic missile tests — which the country regularly undertakes to boost its defensive prowess — and said the issue of the tests "falls outside [the framework of the UN Security Council’s] Resolution 2231.”

Resolution 2231 was adopted on July 20, 2015 to endorse a nuclear deal between Iran and six world powers, known as the Joint Comprehensive Plan of Action (JCPOA).

Under the resolution, Iran is "called upon” not to undertake any activity related to missiles "designed to be capable of” delivering nuclear weapons. Iran says it is not involved in any such missile work and has no such warheads.

Zarif said all the parties to the JCPOA, including both France and the previous US administration, have attested that Iran’s missile tests have nothing to do with the nuclear agreement.

Over the past 250 years, Zarif said, Iran has never started any wars, and the country never turns its weapons against anyone but foreign aggressors.

The top Iranian diplomat said the Iranian people do not wait for anyone’s permission to engage in defending themselves given their experience of the 1980-88 war imposed on the Islamic Republic by Iraq and the toll international terrorism has exacted on the country.

American and Israeli officials have claimed that Iran recently carried out a ballistic missile test.

Iranian officials have not confirmed any such test. But the US mission to the United Nations (UN) said on Monday that it had sought the UN Security Council to discuss the reported launch, alleging it defied UN resolutions. The Council then decided to hold an emergency meeting on Tuesday at Washington’s request.

Talking to Interfax news agency, Russian Deputy Foreign Minister Sergei Ryabkov took on the matter, saying that Moscow had not confirmed that the missile test had taken place. He said that even if such actions took place, they "do not breach the resolution,” referring to Resolution 2231.

Ryabkov said demands for the UN discussion were aimed at "heating up the situation.”
Zarif, meanwhile, said that the US had already registered a shameful record by issuing visa bans against nationals from seven countries, including the Islamic Republic.
US President Donald Trump on Friday signed an executive order banning the entry of citizens from Iran, Iraq, Libya, Somalia, Sudan, Syria, and Yemen into the United States for 90 days over purported security concerns.

The French foreign minister, on arrival in Tehran, had said the order was "dangerous,” amounted to "discrimination,” and had to be revoked.

The Iranian foreign minister also said Iran has, as verified by the International Atomic Energy Agency (IAEA), complied with the nuclear accord, Presstv reported.

"Unfortunately,” he said, however, "we have not witnessed as much commitment to the JCPOA on the part of the other parties to the deal, especially the United States, as we have exhibited.”

"A case in point has been the US overseas laws, which continue to prevent the complete implementation of the deal,” Zarif said.

He was referring to US laws that mete out punishment to the foreign financial entities engaging in business with the Islamic Republic.