Secretary of Iranian Supreme National Security Council Ali Shamkhani said that that durability of the nuclear deal is closely associated with fulfillment of commitments of the two sides to the deal. 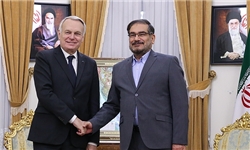 "Durability of the JCPOA depends on abidance of the two sides by their commitments,” he said, warning that disregarding the process under any excuse and approach would lead to counter measure.

Shamkhani in a meeting with the visiting French Foreign Minister Jean-Marc Ayrault here in Tehran on Tuesday also referred to terrorist threats, and said, "Adopting dual-track approaches in confronting terrorism and separating terrorism into two good and bad categories will only result in spread of violence and crime.”

He also called for real and joint efforts of the international community to block support in terms of financial resources, weapons, recruitment and media propaganda for terrorist groups across the world.

Jean-Marc Ayrault, for his part, said, the landscape of political and economic ties between Iran and France is quite brilliant.

"Delivery of the fist Airbus plane ordered by Iran is a clear sign that grounds are being provided for economic cooperation between the two sides,” the top French diplomat said.

He also appreciated Iran’s compliance with the JCPOA commitments and said, "The path forward is definitely providing interests of the two countries in economic and political fields.”