Iraqi Prime Minister Haider al-Abadi said a controversial decision by the administration of US President Donald Trump to restrict arrivals from Iraq punishes people who are "fighting terrorism." 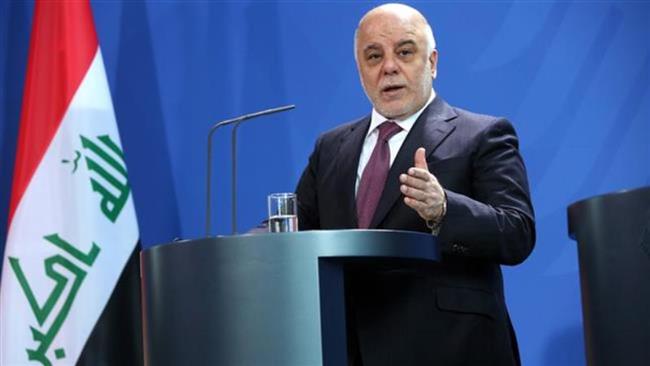 The premier said on Tuesday that the ban, which prevents Iraqis, along with citizens from six other Muslim-majority countries, from entering the United States, punishes those people who have rendered sacrifices in combating terrorism.

"You come to the victim to hold him accountable, to the people who are sacrificing, who are fighting terrorism, to punish them," Abadi stated.

The move by Trump's administration has sparked a growing backlash in Iraq, whose forces are fighting against the Daesh Takfiri terrorists.

The Iraqi Foreign Ministry on Sunday described Trump's travel ban as a "wrong" decision, calling on the US administration to mitigate the impact of restrictions on Iraqi travelers.

Iraqi legislators have also voted to call on the government to enact a retaliatory measure to block American citizens from entering the country if the US does not withdraw the visa ban against Iraqi travelers.

There are already American military personnel, non-government and aid workers, workers from energy companies and American businessmen present in Iraq.

In a move that sparked widespread censure, the new US president signed a sweeping executive order on January 27 to suspend refugee arrivals and impose tough controls on travelers from Iran, Iraq, Libya, Somalia, Sudan, Syria and Yemen, Presstv reported.